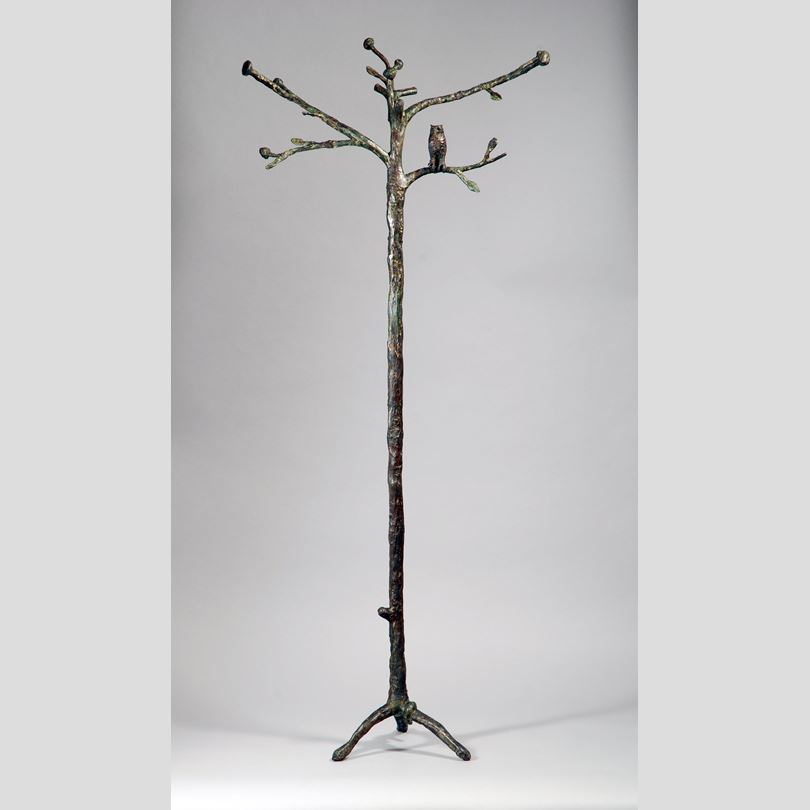 Frontal variation with four branches, one of the first manufactured.
Bronze with green red brown patina. Welded and assembled by the artist.
H : 167,8 cm, L : 70 cm, D : 41,5 cm
Artist example without signature, as usual before 1970, few examples identified[circa 6], this one from the collection of Jeanine Dubois, interior designer, dead in 2012 in the Basque Country.
Circa : 1965-1968 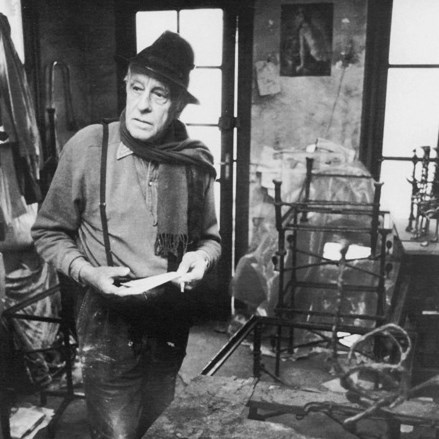 Diego Giacometti is often presented as a faded personality, who has always lived in the shadow of his elder brother, Alberto. Without work in 1925, it was on the advice of his mother that Diego came from Switzerland to Paris, «You will watch over Alberto, my son» and that they remain together, already at 46 rue Hippolythe Maindron in 1926.

He became his confidant, the one who is always there, the patient model and, from 1929, his zealous and talented assistant, helping him for armatures, moulding, stone and marble... In short, the younger brother, who seems to have always felt a little lost in life, quickly becomes «the link» and the guardian of the daily life of Alberto.

With the Diego help’s, Alberto produced in the 1930s for Jean Michel Franck the decorative objects that we know, lamps, floor lamps, bas-reliefs and doors, etc. This is from the end of this decade, in 1938 it is said, that Diego begins to create his own decorative objects. These are produced in very small numbers, first because of the proximity and turbulence of the War, then after because He devoted himself totally to the production of his brother, whose fame became worldwide in 1947.

In June 1961, Diego moved into a house purchased by his brother at 16 rue du Moulin-Vert; he expanded his collection of decorative objects – of which ours belongs to – furniture, armchairs and lamps to be proposed at the Galerie Pierre Matisse in New York. But it would be necessary to wait for Alberto’s death in 1966, to see his production accelerate, production which he will always be reluctant to sign, in respect for Alberto, despite the insistence of his gallerist. He will only sign at the end of his life and still only with the “DG” monogram or his first name.


By the quality of the chiselling and the red brown patina with oxidation greens, by the strong architecture of a design without anecdotal concessions, our Porte manteau, realized by his usual technique of assembly[1] , of which there are only six examples identified today, is part of the first production, the production of Excellence[2]: the «artist editions», entirely made, chiselled and patinated by him.
From the beginning of the 1970s, Age and Success coming, Diego will work with assistants. They will be three, the last one being Phillipe Anthonioz, his assistant for the last project, and not the least, at the Picasso museum.

[1] In this process of creation, Diego proceeds by assembling elementary forms welded together, previously sand cast. He follows the techniques of his predecessors from the 19th century, Barye and Fratin in particular, techniques that easily let possibility to create variants.

[2]. This led some authors to say: “Inherent to the bronze, patina gives it its shade, its vibration and its depth. Like the light that clings to it, it animates the surface of the object; Diego loves them golden, brown or black; later jade-green. This one is characteristic of the last years of his life that we find less attractive. Gradually losing sight and sensitivity to colours, he cannot get the quality of yesteryear; the material, once thick and rich, becomes more uncertain, the bronze less tactile” (C. Boutonnet & R. Ortiz, Giacometti DIEGO, Éditions de l'Amateur, Galerie Arc en Seine, 2003, page 136)